WAR CAT TOY’S “DC DEADBEATS” LINE DEBUTS ON KICKSTARTER TO PROVIDE POLITICAL COMIC RELIEF.
That real-world relevance in part explains the pop-culture resurgence of zombies over the last few years. As epidemics and emerging diseases like SARS and swine flu have grabbed the headlines, zombie fictions like “Walking Dead” and “28 Days Later” have brought the undead a new cultural cachet. And now the creators of WarCat Toys are bringing zombies to life, in a whole new way.

The line is called DC Deadbeats, a hilarious collection of handmade Zombie Figures, with a few well known characters like Zobama, Hillary Rotten and Necro Nancy. If you are someone who is disgusted with Washington DC’s antics, but you still have a good sense of humor, then this is the line for you. The creators of this project have made something that is a fun addition to collector items.

In addition to offering the figurines, Kickstarter backers can purchase “voting rights” which essentially makes the backers part of the company. The users will receive periodic email surveys containing new characters, new stories, and new concepts that users can vote on, for the life of the DC Deadbeats Collectible line. This is what makes crowd funding so amazing; backers can take stake in the companies they fund. 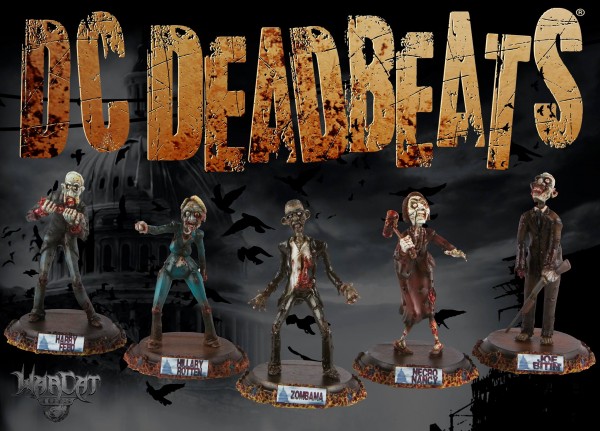